This is legitimately the WORST customer support response I’ve ever received. Period. Flat out embarrassment. Whoever took the time to “reply” to my question is a lazy moron who probably pastes the same canned response to everyone, telling them to call the phone people so they don’t have to handle it. We actually had a support rep where I worked a few years back do the same thing. Guy’s only job was to respond to tickets – no phones – and he was finally fired after we discovered he was sending generic responses back, not answering the question, telling people to call in instead. So much for diverting calls away from our phone reps… Wonder if this is the same idiot: 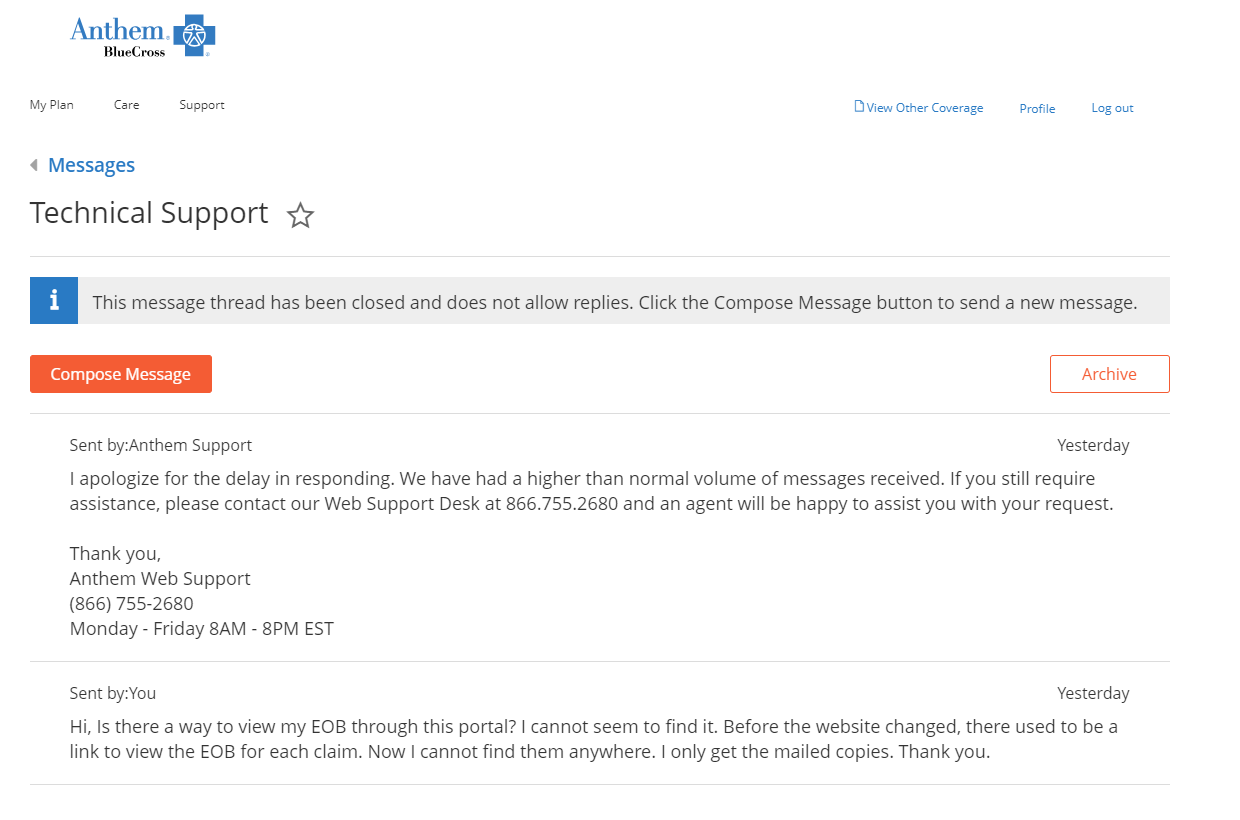 Get the FUCK lost. I have no patience for shit like this.

Social media stinks. Facebook is garbage (politics are garbage, don’t want to hear it, k thx). I’m over bitching on Twitter, and am trying to get more positive. Instgram’s cool for now (I’m sure Facebook will ruin it eventually), especially seeing a stream of people’s life experiences.

Made me wonder about why social media is bad for society these days. I was out at dinner tonight and there were a bunch of high school kids at homecoming. Not talking, just on their phones 85% of the time I looked over. A table full of middle school kids – all on phones.

But most important reason social media is bad is that it’s addictive. Obsessedly checking for likes probably hits all the same sections of the brain as hardcore drugs do…

So real talk – I was going through my feed and liking people’s posts. And I flat out don’t like some. I’m either not into that person, or my idiot negatively firing brain for no good reason just wants to make fun of people’s looks or bullshit like that. But I want to be a nice person so I’ll never be mean… So I tell myself, wtf – these people can’t help how they look, they’re happy, why are you trying to rain on their parade ya fuckin miserab. So I stop because I don’t have any room for being a jerk to people.

Where am I going with this? So I wondered if people wondered or noticed I don’t give a royal shit about them, on the grounds that I don’t like or comment on any of their posts. And that’s narcissistic af, amirite?

And this is exactly my point of why social media is a dumpster fire. Because before all this shit, I’d be out in nature with friends having a ball. But what am I doing instead? Obsessingly checking for likes, having asshole, negative thoughts and being a narcissist who wonders if people are mad or notice that I like it some people’s shit but not theirs. Does it make them feel bad, jealous? Do they not care back? Not notice? Why am I thinking these things? Jeeeeeesus. 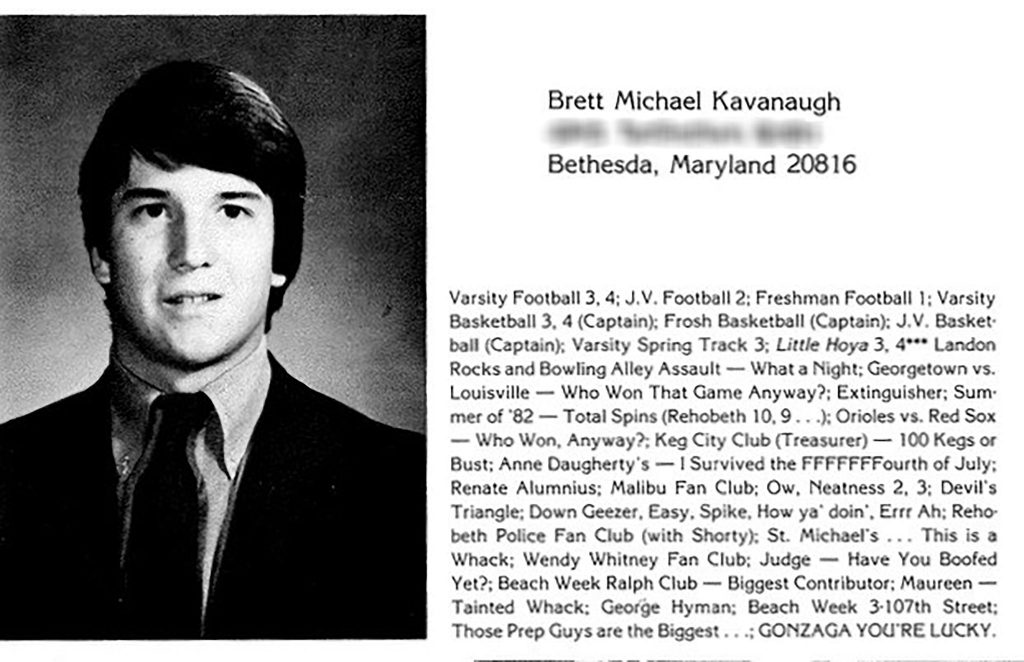 So I’m going to analyze Brett Kavanaugh’s yearbook entry, because I’m an expert at all of this. I worked on high school and college yearbooks and I went to HS and College with many sports bros so let’s pick out a couple things from above and study them a little closer. Given all the controversy, I wouldn’t be the least bit surprised if you’re looking at the HS yearbook page your future Supreme Court Justice…

What a fuckin alcoholic jock bro asshole extraordinaire. Reading this reminds me of all the assholes I hated in high school. All the mean, jock, partying bros. Back then I was bitter about it because I didn’t have any fun in high school. I was a goody two shoes. Studied on weekends, didn’t go to the football games, and wasn’t popular with the sportsball players. I’m not trying to be some temperance crusader, but people like this stink.

“Georgetown vs Louisville – Who Won the Game Anyway” and “Orioles vs Red Sox, Who Won Anyway” – Translation: We were all blackout drunk and have no idea who won the game. I’ve been there. Been to a couple Yankee Games with the boys and got so plastered I had no idea what the actual hell happened in the game. We were just heckling the guards for not letting us sit closer and having a time. Nothing wrong with it as long as you don’t go sexually harassing people.

“Have You Boofed Yet” –Gotta be honest. Never heard of boof. Had to Urban Dictionary it and came up with these two gems: 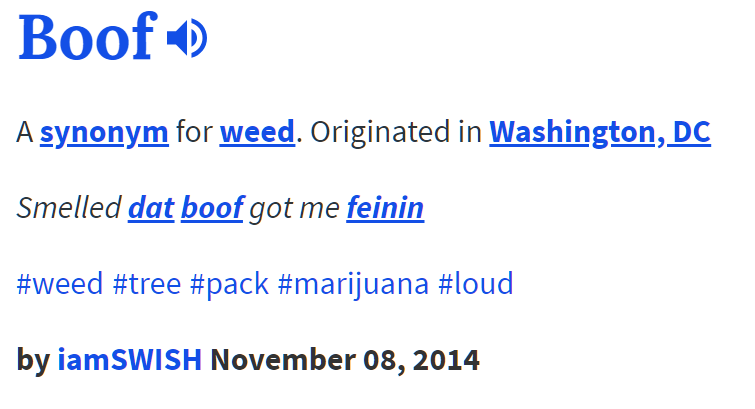 If you’re going to “boof” you might as well just have a little weed, because funneling booze up your asshole seems a little extreme. But hey, our Tweeter in Chief think’s it’s okay to to grab women by the pussy these days, so what’s the harm in railing a little coke up your butthole – seems like something your average Supreme Court Justice would be down with.

“Beach Week Ralph Club” – Throw up club, duh. When you Ralph, you puke.

“Renate Alumnius” – Obviously ya boy Brett and his football team ran train on poor Renate. The fact that his lawyer issued a statement on this is laugh out loud funny. “A White House spokesman, Raj Shah, declined to comment beyond the statement from Judge Kavanaugh’s lawyer. Four of the men who were pictured with Judge Kavanaugh in a photo captioned ‘Renate Alumni’ said it was simply a reference to their dating or going to dances with Ms. Dolphin.” ðŸ˜‚ðŸ˜‚ðŸ˜‚ðŸ˜‚ðŸ˜‚. Tell me another one. A bunch of guys innocently dating or going to a dance or two with the same girl is 1000000% not inside joke yearbook worthy. The only way you all do that is if you all hooked up. End of story.I’m thinking it was something more along the lines of what happened with Miami’s 7th Floor Crew:

Guy seems like an absolute gem. Sounds like a person who’d make sound decisions for the US of A.

CNBC– 29-year-old Keith Rosso, recently used a credit card to buy a Tesla Model 3 with his wife Liz for a total of $58,857, including taxes and fees.Although Tesla wouldn’t let Rosso purchase the car directly with his credit card, they accepted the payment through Plastiq, a third-party service that charges a 2.5 percent fee. Rosso qualified for the Ink Business Preferred because of his eBay side hustle, and he notes that’s what’s special about the card is that it offers a high credit limit as well as the option to spend beyond that limit if necessary. His credit limit was around $37,000, so he exceeded it by about $23,000 to put the entire car payment on the card. But since he and Liz had the funds saved, they were able to pay the card off in full and they didn’t have to deal with any extra fees or interest payments.

The fact that this is an actual thing is mind bending. I can’t believe that a business related news organization actually covered this absurd story. The whole thing seems like a giant advertisement for Plastiq and Chase. Anyway, this guy Keith Rosso is a fucking DOUCHE. CANOE. If I ever pulled this shit off, by no means would I be bragging about it or want a story written about me. Look how ridiculous this sounds: “Oh look at me! I sell shit on ebay and qualified for a business card, so I bought some credits to pay Tesla through a third party service in order to get points. But only do this if you’re a privledged white boy who has the liquid cash to immediately pay off the card” Fuckin hack. This is the kind of shit that gives Millennials bad names. I have three problems with how this went down: I’m all for gaming the credit card rewards system. I do it myself. Banks make ZERO money off of me. Zero. They lose money from me. I manipulate my purchases to get as many points/rewards/cashback matches as possible and never owe any interest. That’s fine, banks are rich AF, so the hell with them. But to do this on such a grand scale and brag on CNBC about it is silly. Look at this absolute goofball: 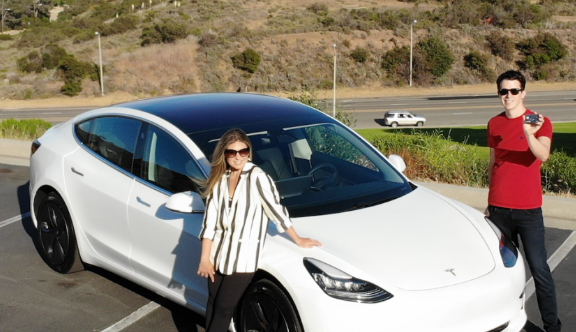 Image of privileged white boy and his wife who needs to get her God damn hand off the car; jacked from CNBC

And get the closing line of the article:

Now they’re considering using the points to spend seven nights at a Hyatt in the Maldives or on round-trip business class tickets to Australia. 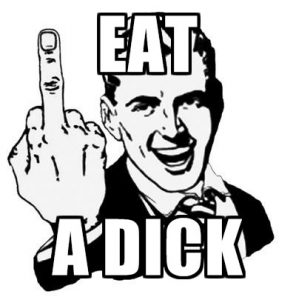 Dude if you have the money, just drop 7-10k and go to the fuckin Maldives. Invest the rest, and buy a Tesla with financing. Idiot.

Lisa Fiekowski is a secret millionaire with an intriguing exercise routine: collecting trash.

Fiekowski owns more than $8 million worth of properties around New York City, including a $1 million co-op next to Prospect Park, the Post said, citing records. But at least one of her investments is uninhabitable, thanks partially to her unusual hobby the Post reported that she had packed one residency with an old microwave, an umbrella, toys, carpets, and other trash.

Fiekowski has been collecting cans for about a decade, telling the Post she generates $20 to $30 for a few hours of work. She said she enjoys it because she can keep active, talk to her neighbors, and keep her area clean.

Meanwhile, Fiekowski has an MBA from the University of Chicago, and her husband makes about $180,000 a year, the Post said. She’s worked as a marketing analyst and a stockbroker, and her parents were high-ranking economists in the US government.

Articles like this blow my mind. This woman is outside her fucking bird. Literal mental illness. I have so many problems with everything in this article. You have to be a certified, psychopathic lunatic to be so educated and well off to be collecting cans like that. It’s flat out homeless, hoarder level shit.

She’s doing this to keep busy? Get a hobby lady! There are so many ways to keep busy. Volunteer at a soup kitchen! Do works of charity! Come on, she’s an educated, rich, wealthy woman. She could be using her resources to do much better things. But no. They’re all going towards collecting cans like a slob.

It also makes me laugh that she’s whining about intolerance and being judged by neighbors. Ya think? I’m all for tolerance, but you can’t have riff raff like this lousing up the neighborhood. It’s one thing if you’re actually homeless and can’t help it, but being educated and wealthy – zero excuse. This lady has to deal with her consequences.Waaaah. My neighbors hate me. Wahhhh, my family thinks I’m crazy. Yes. They are all correct.

And I’d like to know who her husband is. That guys gotta be equally as nutty to be making 180k per year and putting up with this lunatic. If he’s not considering divorce, or faking his disappearance/death, he’s equally as insane. There’s hope dude, get out while you can.

Look, I’m as green as they get. I encourage recycling and removing plastic and cans from trash. If you want to clean up your neighborhood, go for it. But be real about it. Recycle all the shit and move on. Don’t store all that crap in multi-million dollar properties and spend hours making $30 from bottle/ deposit machines.

Which brings me to my next point. Fuck bottle and can deposits! It does not encourage recycling. Cess pool New York needs to cut out this nonsense immediately. All this does is lead to extra expenses for stores to maintain bottle and can deposit machines, and gives rise to people picking through trash to make a nickel. And rich people can’t be bothered returning these deposits and it ends up in the trash or curb side recycling anyways.

I actually have much respect for rich people living modestly, like a common person, but this is not within reason.