I was working on an Android app and using the debugger which lists every event that goes on on my phone and I noticed a process calledcom.verizon.android.wifios. This process belongs to Verizon FiOS Mobile Remote, which is a remote replacement and DVR manager for FiOS TV.

Every time I killed it from the debugger, it would re-launch. I also noticed it has this thing called vzAnalytics, which looks like it reports phone stats back to them. The best part is that Verizon lied about the email address they provided in the market. I emailed it and it bounced. Assholes. I might uninstall this 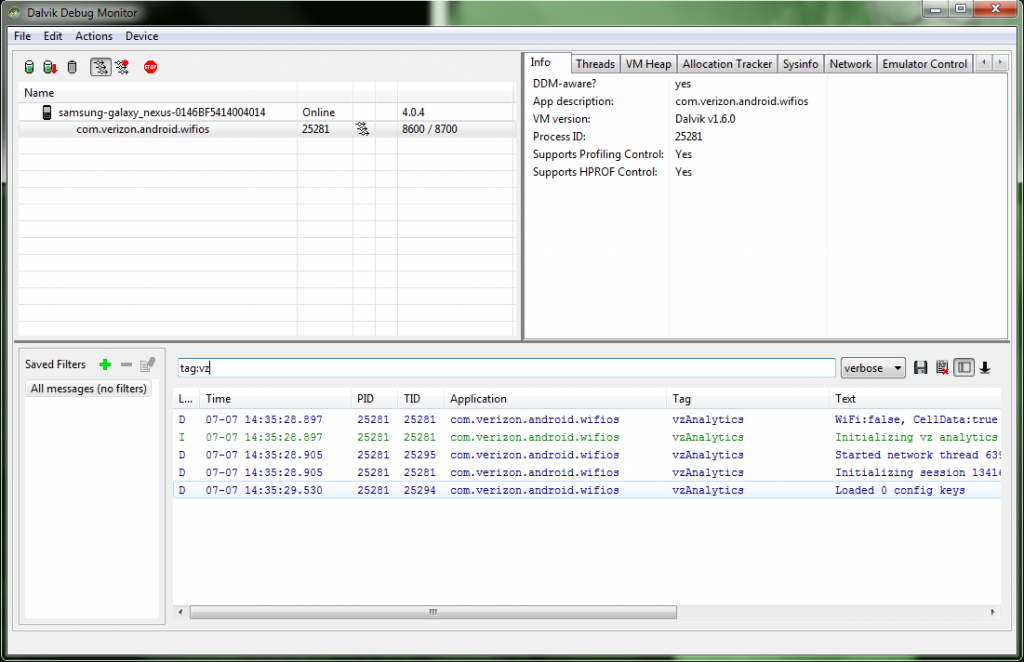 Bunch of Ballers over at Verizon: 300MBPS FiOS? JEEZ

This is some insane shit. Verizon’s got a good pair of balls just going around beling like “Ya know what? We’re gonna just increase everyone’s speeds for no reason.” They just roll like that. They increased my speeds like 12 times for no reason since I got it for the first time. Also, when I initially wrote about FiOS in 2004, I was drooling over 5/2 and 15/5. That’s pussy speed. My 4G is faster than that.

A big Fuck you to cable companies. Eat my asshole James Dolan! Suck it U-Verse. Way to go, Big Red. Finally making America’s shitty ass internetcomparabletoJapan, Taiwan or any of those other more civilized countries that have insane speeds. When I get my 150/65, I’ll post back in:

Note: This praise of Verizon DOES NOT extend to Verizon Wireless. Fuck that division. Fuck them for releasing shitty phones, having asinine CDMA phones no one else in the world uses, $30 upgrade fees, killing off unlimited data,for never releasing updates to Android phones and for bastardizing Android phones with bloated ass Verizon shitware apps.

Fuck Verizon Wireless For Not Updating My Galaxy Nexus

This is a bunch of bullshit. Verizon has some pair of balls being so slow to update the buggy assed software on their phones. It’s like… They sell you the phone and then they immediately stop giving a fuck. The fucking thing wasn’t updated since December. Sprint launched the phone much later and even they have the 4.0.4 update. Don’t they understand this phone is a glorified buggy piece of shit? Half the fuckin time, I can’t even switch smoothly between 3G and 4G because the radio has a hard time accurately reporting, finding and switching between different signals. The keyboard lags when typing. The volume is low. It’s all fucked up.

Google Maps released version 6.7 which completely fucked up GPS Navigation on Android 4.0.2 only. It used to speak the street name and exit numbers during driving nav. Now it’s just like “In two miles, turn left” “Take exit right” How the hell should I know when two miles is. Motherfucker, I’m driving – I don’t want to look at my GPS screen to see what road I should turn left on. It should just tell me to “turn left on Ballsack road” or some shit. If Verizon would have updated to 4.0.4 (which is out by the way, they just won’t push it), I wouldn’t have this issue.

I should have rooted this motherfucker from day 1. Then I would be able to install my own updates on it and I wouldnt’ have to wait for Verizon to take MONTHS and MONTHS to do this. If I want to root now, I will have to wipe my entire phone, which is a pain in my balls. But I should root so I can install DroidWall and block ads and shit, and be able to tether.

If the Nexus Prime Comes to Verizon, I’m Doing the Nakey Dance

Gizmodo -“Verizon doesn’t think the Samsung GALAXY S II will be competitive with the iPhone 5 when it launches,” according to their sources. So instead they’re running with the much-anticipated Nexus Prime, the first phone with Android 4.0 (aka Ice Cream Sandwich). And it’s gonna be a Verizon exclusive when it lands in October.

We all know that Verizon’s phones suck ass. Never a pure Google Android experience and they bloat it up with shit apps that are awful. I posted about it many times. Well, someone got smart over there and wants a true iPhone 5 competitor. It’s a Samsung Nexus branded phone, meaning it’s pure Google.

If this thing has Android 4.0, has a pure Google UI (not that Samsung TouchWiz shit) and is unlocked, I’ll be online like those Apply fanboy assholes.

Holy Crap, I Actually Agree With Apple for Once

Giz -When iOS 5 launches, Facetime calls over 3G will be possible. But according to 9to5mac’s sources, Verizon only wants 3G Facetime available to userswho have tiered data plans, not unlimited ones. Apple doesn’t like this.

Fucking Verizon Wireless. First they kill off unlimited data. Now they want to cripple FaceTime (iOS’ streaming video) for people still on unlimited plans. Verizon has SOME nerve grandfathering people on unlimited data plans and then treating them like they suck and banning shit. Duh videochat is going to use more bandwidth. Why ban it? It’s because they want people to max out their bandwidth caps using it and pay ridiculous overage fees.

Well let me tell you something, Verizon. Ain’t getting your way against Apple. When Apple wants something, they get it. They have more cash that the entire US Government for Christ’s sake. Obviously, Apple is all about its iOS user community and it wouldn’t want some.

Who the hell is Verizon restricting which apps are allowed to stream video and to whom. Net neutrality, ya fuckers.

Side note – Verizon for landlines is still awesome with FiOS and no plans to cap data any time soon. It’s the assholes over at Verizon Wireless who suck.