WOW. I looked at the source on one of my WordPress error pages and saw this. Is this serious? IE is such a piece of shit that it doesn’t render the page properly unless it is greater than 512 bytes? Jesus! So WordPress actually had to go and add a comment in to increase the page size, just for IE. WOW. I’m speechless.

Whaaaaa? Microsuck just released IE7 and you mean to tell me there already is a public beta for 8? Yep, and I have the “privilege” (rolls eyes) of testing it. I will give you a full review of it below. Warning: while I try to post in plain English, I may use some terms unfamiliar to you non-techies such as CSS, XHTML, Acid2 etc. Use Google and learn something.

What’s the deal with IE 8? Let’s start with the graphical interface. Microsoft did not really do anything with it. Everything looks just like IE7. the only thing I noticed is that it looks like they finally got favicon support right. Also, i. There is also a bug where there is no text select cursor and you only get an arrow. For a complete listing of features according to these morons, go here.

And here is the part where I simply slap my head in shame. IE8 was claimed to be released to pass the Acid2 test and be standards compliant. Yes, IE8 does pass Acid2, but that is not the point. What good is passing a stupid CSS test, if it renders many other pages WORSE than IE6 does. That’s right folks, they broke it big time. Let me put it nicely. The developers pissed, shit and puked on the page rendering engine before slapping it in a browser and hastily releasing it to the public. Portfolioso.com’s main page (not the blog) is XHTML strict and renders properly in Firefox (1,1.5,2,3), Safari, Opera, IE6 (kind of – no transparent PNG support), IE7 and probably other browsers – yet looks like ass in IE8. Once again, Microsoft added support for web standards, and we have a website using valid CSS and valid XHTML Strict, still displaying improperly. “Oh but cut them some slack, it’s just a beta.” NO! They don’t get any slack. This is a rich company that has been working on this for months. They should do a half decent job before releasing it to the public.

I have a couple of screenshots of how poorly webpages look in IE8.

The quick and dirty: This is a very poor release and Microsoft should be ashamed of themselves. Ever with the exception of Windows XP, every product released after that is pure garbage, and IE8 is living up to those standards. I’m assuming these rendering problems will be fixed in future IE8 beta releases, but we shall see. Firefox 3 (I test betas of that, too) is kicking serious ass. Firefox 3 is amazing – I cannot say enough about it. When it is finally released, everyone NEEDS to get it for many reasons (another post). The only thing Firefox 3 lacks that IE7 has is a thumbnail view of all tabs. But that’s just eye candy. When it comes down to solid performance, Firefox wins.

Since IE6 is such an inferior piece of crap, the fools at Microsoft decided that its time to release a new version of Internet Explorer. A few days ago, Internet Explorer 7 Beta 1 was released and I got a hold of it somehow. They added useless features and utter ugliness.

Microsoft decided to add tabs but at first, they were skeptical. Here’s a quote from IE product unit manager Dean Hachamovitch: “Some people have asked why we didn’t put tabs in IE sooner. Initially, we had some concerns around complexity and consistency–will it confuse users more than it benefits them? Is it confusing if IE has tabs, but other core parts of the Windows experience, like Windows Media Player or the shell, don’t have tabs?”

This ignoramus works for Microsoft? What’s he on crack? What the hell does he mean that Windows Media Player or the Windows shell does not have tabs? Go into the options in Windows Media Player or any other M$ product like Word, Excel, Powerpoint, even the IE6 options – they all are tabbed. And if you are not counting the options dialog boxes, then if you want tabs go into Excel and look on the bottom – Sheet 1 Sheet2 and Sheet 3 – TABS. So tabs are part of the shell and widely used.

And here’s my other complaints about IE7:

This is only beta 1, but it sucks. If IE7 is anything remotely like the beta, then I’m still using Firefox. Actually, scratch that. I’ll ALWAYS use Firefox, no matter what M$ does to IE… 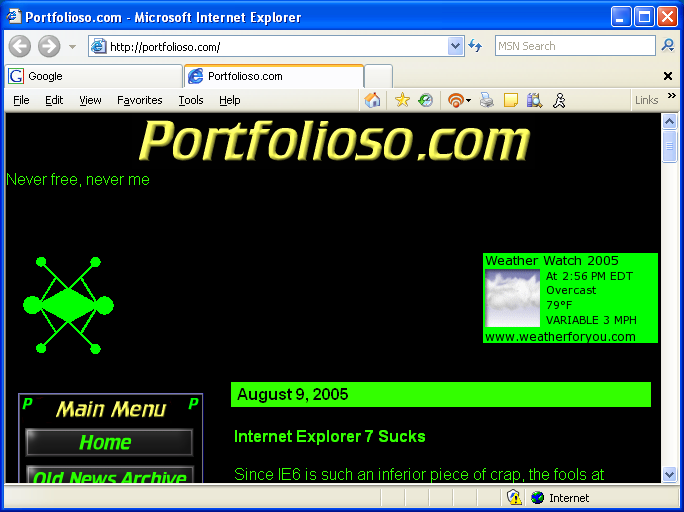 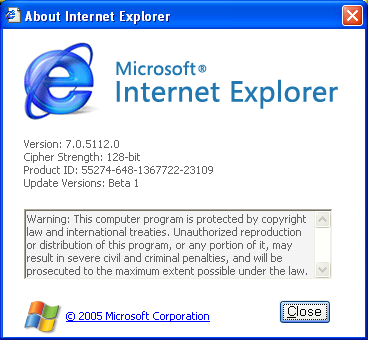 You’ve Got to be Kidding Me

If you don’t feel like reading this whole article I can sum it up in two words: Get Firefox. If you want to read on about how IE sucks, then go ahead.

I decided to use IE just for the hell of it and see how crappy the internet is without Firefox. Since Service Pack 2 should have made it more secure, I decided to see how true that was. Apparently not.

ActiveX controls are the things that popup and ask you to install things, usually adware. Service Pack 2 blocks all of these by default but a little bar pops up on top telling you that it was blocked. Of course, IE is still vulnerable unless you go into Internet Settings and turn off ActiveX controls, but no one does this. So because a bar pops up notifying people when sites try to install bad software, this makes IE okay, right? Wrong…

Here’s what really pissed me off. Sites know that SP2 blocks their spyware, so now they provide detailed instructions on how to install it, bypassing all of SP2s new security features (which are weak anyway). Yes, it’s happening. “In order to continue using our site you must…” Check out the picture for the actual instructions given. Quick note about the picture – it is a real screenshot and a javascript detected Internet Explorer and those instructions popped up over the main content of the website. Dumb people would follow the instructions because they want to access the site. And here’s the kicker. The damn thing says security warning, and the instructions are asking you to install it. People are really dumb and would.

I can’t make this point any stronger: GET FIREFOX!!!! I went to the exact same site and every bad script and popup was blocked.