Fuck Firefox. It’s such a piece of shit browser. I’m not even joking. It fucking never works and I hate using it. As a matter of fact, for the past year and a half, I only use it for work (to keep my work bookmarks synced and so I can use Chrome instead). I’m on the verge of scrapping that shit and using Chrome’s multi-user feature. Firefox’s UI is clunky as fuck. I hate it on the grounds that it constantly becomes unresponsive and eats memory faster than a fat chick on Thanksgiving.

Seriously though. Don’t Mozilla’s engineers realize how shitty their shit is? No. They’re probably all on Chrome. Fucking IE 9 and 10 are better browsers than Firefox. First off, their auto-update feature is horse shit because it never actually auto-updates unless you check the help dialog. Chrome updates without you even realizing it. Which is how it should be. When there are Firefox updates, they’re too busy adding bullshit HTML5 shit that no one uses, PDF readers (which Chrome had since ’08 and nothing else useful).

Also, is this motherlessly necessary:

I have a solution for you Firefox users (on Windows). Do the following:

TL;DR: Fuck you if you use Firefox. Don’t. It sucks monkey balls.

Firefox: Now Shittier than Internet Explorer (In terms of Security)

Welp, there you have it folks. Mozilla has gone the way of the shitter. I told you they were losing it over the years. Ever since that there Chrome came around, they were basically like “fuck it, we give up. Let’s just rapidly release like 6 versions in a row that have like 4 improvements each”

Chrome is the only browser that has a true sandbox, meaning that even if malicious code gets exploited, it has 0 access to your real computer. It’s good because it was built from scratch. Not built on top of Netscape from like 1997

Granted, this study is probably biased because Google paid for it. Microsoft paid for another one and said IE was more secure. Either way, I can attest to the fact that Firefox is a real insecure shitpile. One day on Windows XP a few months ago, I typed in youtube wrong and went to some rogue website and bam. Virus. Didn’t even install anything. It just buffer overflowed, executed remote code and that was it. I had to format. Another website I went to threw memory corruption errors in Chinese! What the f mang? How’d that happen? Obviously there’s some JS executing going on over there.

Ever since then, I have nothing to do with Windows XP and Chrome is my main browser.

I just downloaded Firefox 5 beta. The Acid 3 test actually fails worse than in Firefox 4. Ought to be damn ashamed, especially since Google Chrome passed that shit like 2 years ago. “You should not see this at all” Wonderful. 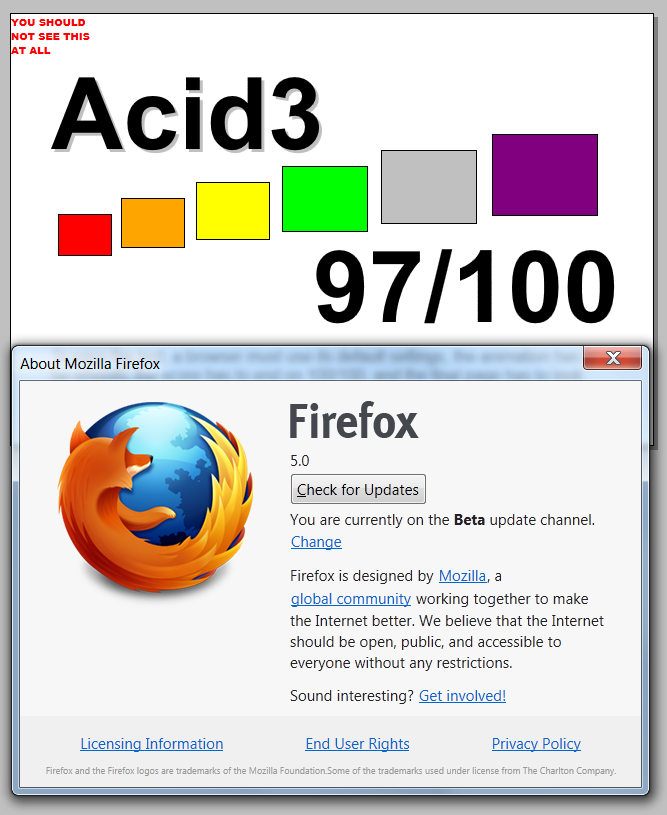 Firefox 4 is being released Tuesday and if you followed my blog for the past few months and ready my comments about the betas, I ripped it toshreds. That being said, they really cleaned it up by the time the Release Candidate hit and now I have to say I’m a fan. Sorry for being critical – it was for your own good. And for the most part, it’s decent. I will still use both browsers. But these things need some work:

Where is it better than Chrome?

Overall, a very solid browser. I take back my previous rants about it.

K blogged about it. Happy? 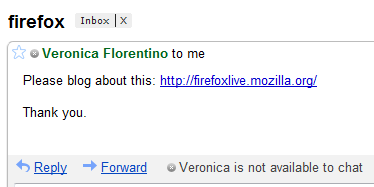 PS – Mozilla, get your shit together. Instead of filming fuckin animals, how about Google Chrome is pissing on your sorry ass in the performance department. Might want to fix up that javascript engine, fools. Seriously. You see Google Chrome 8? Thing is ballin. You start it and it pops up instantly. It’s like 8 times faster than 3.6 in speed tests, it’s still faster than Firefox 4 beta. Oh and they’re on version 8 already… Jeez.

This is why Google’s better. They have a bunch of people getting paid holiday bonuses, creating good products. Mozilla’s over there picking up fire fox shit in cages.