If You Follow Your GPS Into a Lake, You Deserve to Die

Gizmodo – According to Spanish newspaper El Mundo, a 37-yo Senegalese man died when his car fell into a lake near the town of Capilla, Badajoz. According to his companionwho survived the accidentthe driver was following the GPS directions when the car fell into the water, sinking in just a few minutes.

According to amateur blog portfolioso.com, a 37-yo Sengalese man is a fucking idiot. If you are stupid enough to follow your GPS into a lake, you’re a damn moron and you need to be eliminated to improve the intelligence of the gene pool here on earth. It’s social Darwinism at it’s finest. 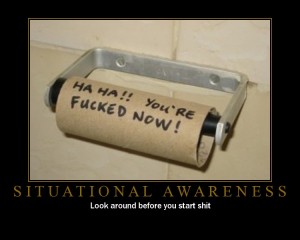 Pay the fuck attention you stupid idiot. You’re driving on a windy, dangerous, unfamiliar road – go slower. Last I checked, your GPS doesn’t drive your car for you. If you drove it off a road, you’re the one with the wheel and pedal asshole. So don’t give me any of this “oh it’s dark, it’s windy” bull, it’s 100% his fault. Could the GPS have been wrong? Yes, but it’s a machine – you use it to help you, not control you. Sorry but it’s called situational awareness. Very important.

So tell me who this schmuck fuckface companion is who survived? Another fucking idiot. What the hell was he doing when his friend was busy driving off a cliff – lounging? If they were in an unknown dark area, you think he’d be an extra set of eyes? You think he be screaming at his friend to stop driving like a maniac on some windy road with no divider and a huge drop into a lake.. Shame that guy walked away. Another moron who needs his genes of this planet.

I love reading these stories on the internet because it’s great ripping on these people. Obviously I’m 100% right. It’s like that fucking idiot who got run over following Google’s walking directions. Probably sued Google for like $300 million too.