This Professor’s Got Some Pair of Balls

Checked my school email for shits and giggles and found this floating in the inbox: 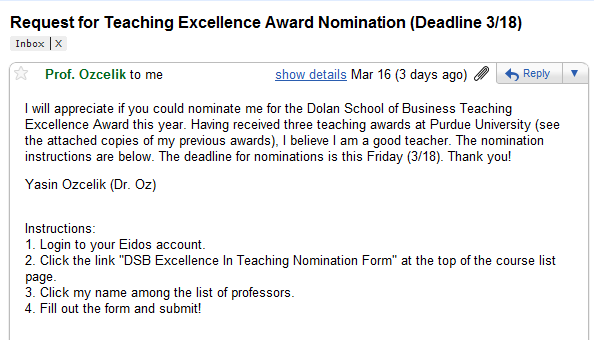 I admire this pompous man. Let me tell you something: I would completely rage if I got this email from a professor who sucked. But I think this ishilarious. Guy straight up batch emails all of his students and former students asking for our vote. Man’s got balls of steel. How confident is this guy – just dropping lines about his previous awards at other schools and how he believes he is a good teacher. Guy even gives you specific instructions on how to nominate him.

Seriously, isn’t the point of this award to be surprised and voted without asking? Cut the bullshit, Dr. Oz, we all know he’s just looking out for his own resume so he can move on to moreprestigiousschools. And you knwo what? I don’t blame the man. Nothing against him though, I actually had him and he was pretty decent, so I’d vote for him if I was still in school. Better than thatotherDrupal obsessed joker or 100% of the accounting professors up in that bitch. (Abusers, if you read this, I expect a full comment on this situation).

PS – Anyone who cancels their final exam and replaces it with a paper due on the last day of class is a winner in my book.

PS Again – You ever see this guy’s pictures? Guy’s a straight up baller. My fav is “Drink aggressively” TOUCHE!

Business lesson with Dr. Portfolioso, CEO of Portfolioso Industries. We will be discussing how to cut costs regarding book purchasing for a management class I am taking

So a week ago, I get an email from one of my professors before class starts. “I will be buying your books. Bring me $100” Well gee, thanks a lot, that’s a lot of money. I’ll take care of buying my own books, not you, and here’s why:

Someone tell this mother fucker he owes me $51.21. This greedy bitch makes over $100,000 per year. I am poor. Cut me some slack, Jack. By the way, thank Christ this is the last semester I need to buy books. It’s all one huge sham.

Moral of the story: This “management professor” is a terrible manager because he can’t cut costs. Everyone knows you need to save money. Under my system, I would have saved $51.21. This is why this jokeface is only a professor of management and doesn’t actually manage anything in real life. Okay, this is only like $50, but in corporations, we’re talking millions. It’s the same concept though. People like him break this economy and drive companies to the ground.

eFollett is one of the most awful companies around. They exist for the sole purpose to rob poor college students by charging inflated prices for textbooks. At the end of the semester, they either don’t buy them back for real market value or say they have no value. Protip: buy and sell on amazon.com. eFollett will not get another penny from me and I haven’t been to that crook bookstore in two years.

So I’m buying my books for next semester and I can tell you right now, I want to bash my history professor’s skull in and I haven’t even met the man yet. Rather than assigning normal textbooks, I look on the booklist and see the following: 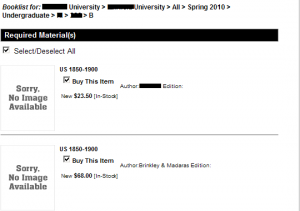 First of all, give me an ISBN, a real title (not the course title) and a real author. It’s doubtful these two books have the same title. The info above tells me nothing. Now I have no choice but to buy these two books from the bookstore because it doesn’t give me enough info to shop elsewhere. I absolutely hate when professors write their own books for the class. I hate it even more when it’s sent to Kinko’s and consists of spiral bound printer paper that they make the bookstore sell for $50. Morons.

You call this a social media site?

Features include: a 1998 styled webpage, boring text links and a joke Asian guy in a wifebeater.

As usual, when my school attempts to do anything regarding technology, they get it completely wrong. Rather than wasting precious resources developing this rubbish, they should spend some time fixing the completely flawed school website, that was just recently redesigned into a broken linked, visually horrifying disasterpiece. They should be fixing our failure Luminis portal, which was down all “weekend” (meaning it was down from Friday to Tuesday) for an upgrade. But forget about that, we need to focus on a social networking site for students and staff, because that’s of utmost importance.

“The success of Facebook and MySpace show that users want a forum to socialize,
engage, and learn – their way,” says Scott Barnett, director of Web Communications at Fairfield. “Fairfield LIVE was built on a robust platform and channels the best of the social media experience into one space – with the privacy and toolset needed on the backend that does this very wisely.”

Let me tell you something, Mr. Barnett: You are a moron. The success of Facebook and MySpace show that users want to use Facebook and MySpace – not garbage being developed by KickApps (anyone ever hear of KickApps?) My ass looks better than the school website, and you’re partnering with some crappy, fly by night social media company that pretty much sold you a version of MySpace. What are you guys blind? Can’t you see that it looks absolutely awful in comparison to Facebook and other modern web 2.o social media sites? Who is on the committee that worked on it and approved it. Apparently, it’s probably a bunch of freshmen that were brainwashed by the administration and think IE 5.5 is blazing technology! Apparently, if you are employed at this school and are involved with anything web related, the requirements include: complete blindness to modern web styles and design, a keen eye for 1998 text based websites, the ability to create text links and the ability to paste corny JavaScript effects into the HTML code of a page.

God knows how much this cost. The school is cutting staff, firing professors and doing everything possible to save a buck in this recession, but we’re rolling out garbage sites that no one will use. Get over yourselves. Save money and the embarrassment of releasing a site that might have been cool in 1998 on my 33.6k dial-up modem. Idiots.

Mirrors embarrassed by Townhouse Thirteen; Cleary appalled with the effort
By: Keith Connors

FAIRFIELD, Conn. — The ball trickled slowly, creeping inch by inch beyond home plate. The catcher picked up the ball and fired it to first for the out.

In retrospect, centerfielder Keith Connors feeble attempt at a base hit on the first at-bat of the season was a micro chasm for the Fairfield Mirrors disastrous, mercy-rule 11-1 loss to Townhouse 13: they just weren’t that good.

“It’s an absolute disgrace,” manager Tom Cleary yelled at reporters following the game. “We work our butts off all off-season and then have this happen. I’m at a loss of words, to be honest. I’m doing the best I can with what I’m given.”

“Today it was boys versus men out there,” he added.

Despite the lopsided result, the first inning was competitive. Starting pitcher Anthony Nardo worked into and out of a bases loaded jam that ended with two consecutive fly outs – a pop out to catcher Jacqueline Stanley and a can of corn to centerfield.

The scoreless first inning, however, was as close as the Mirrors would come. TH13 opened the second inning with consecutive hits to the outfield, capped by a line drive passed shortstop Chris Simmons that inexplicably found the hole in leftfielder Joe’s mitt and rolled all the way to the wall.

“I’m not sure what was going on,” Joe said. “I guess it comes from too many years watching Hideki Matsui. I knew I should’ve had a catch before this game.”

Simmons left the clubhouse without speaking to reporters after the game.

That miscue was only a sign of things to come. The Mirrors misplayed several balls in play to lead to unearned runs. Most notably, Connors and second baseman Tom Cleary both lost fly balls in the sun that ultimately resulted in big innings. Connors had further troubles on mid-height line drives that showed both teams his abject fear of diving headfirst.

“Those were hard plays, give me a break,” Connors said. “I’m out here hustling my (expletive) off every play while (right fielder Chris) Haliskoe is over in right telling me that my girlfriend has better hands. It’s absurd. That is not in our business plan – I can tell you that much.”

Offensively, the Mirrors were lead by third baseman Mikaela Tierney, who reached base in all three plate appearances. However, the ‘Boys of Spring’ left the bases loaded thrice â€“ first, on a pop fly to the pitcher off the bat of Haliskoe; again on a base running mistake by Simmons caused by third base coach Keith Connors; and a third time when Tom Cleary refused to test Rory Bernier’s arm and did not tag up for the mercy-breaking run.

“Tom’s typically the first to go in that situation,” Cleary said. “You know Tom. Tom looks at himself as a hybrid between Rickey (Henderson) and Pedro Cerrano. But it’d be naive of Tom to test someone’s arm with the game on the line. You can’t take the bat out of (Michelle) Morrison’s hands.”

The Mirrors, which likely face potential postseason elimination next weekend, return to the field next Saturday at Barlow Field. Check local listings for time and channel.