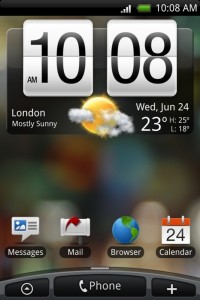 Look at this ugly ass screen. The time is already shown on the status bar. Why do you need a huge ass clock? It's a waste of app space.

You know what’s ruining the Android OS for smartphones? Custom user interfaces developed by hardware companies. I’m talking SenseUI and MotoBlur. Absolute wastes. What is wrong with the standard Android user interface? It’s fine. Anything to fragment the OS more…

So what’s so bad? 1)They’re ugly 2)They slow the phone down and 3)If Google releases an OS update, you can’t get it right away – either because it’s not compatable or because HTC has to tweak it before it gets updated.

Second of all, HTC is a hardware company – what do they know about software and UIs? This is why I hate the Droid Incredible. Hardware wise, it’s really good. But I’m just turned so off by Sense that I probably wouldn’t get it.

It’s bad enough Verizon has to mess around with the Android UI on the Droid. See, when 2.1 was released, Verizon took about 3 months removing features from it. Seriously, what the F? The original Android 2.1 OS was supposed to have a 3D app drawer and 5 homescreens. Verizon was like “nope” and kept the laggy assed app drawer and kept the three screens. The closest device to a pure Android experience is the Nexus One, which already got 2.2. I want 2.2 badly, but Motorola and Verizon devs need to probably strip all the cool shit out of it before sending it over. Mark my words, I won’t be seeing Android 2.2 on my Droid until next fall or later. (Such a shame because 2.1 is SO SLOW).

See I love Android to death and am not a huge fan of Apple, but I have to admit – having only one device helps. You release a new OS and everything updates at the same time. Not this notion that when a new Android OS is released every carrier and manufacturer needs to tweak it first before everyone gets it.

I was going to write lot more, but just read this Gizmodo article. It sums up my point to perfection.